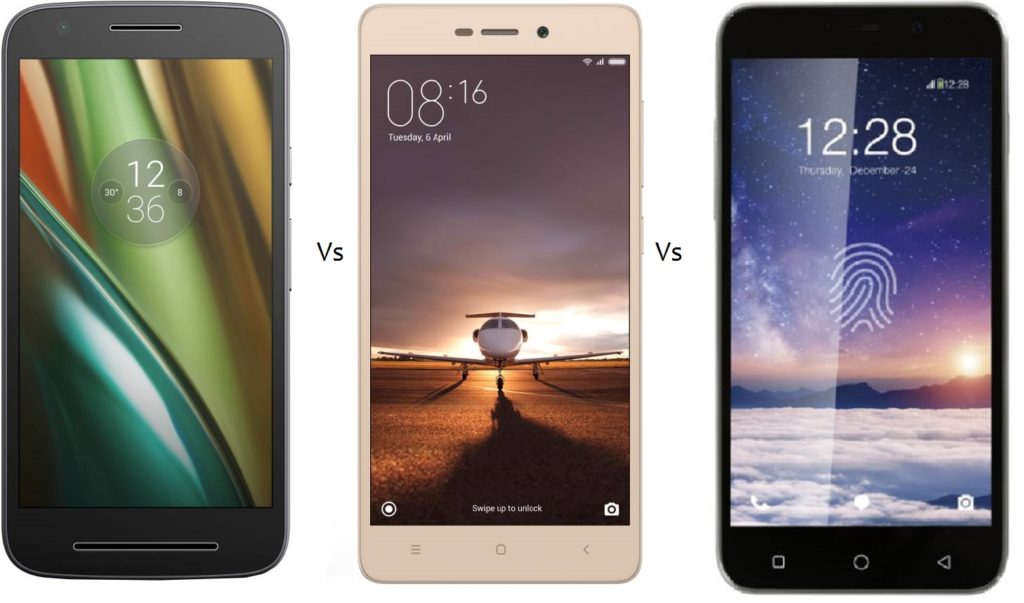 The Lenovo Moto E3 Power comes with 5inch HD display with 1280 x 720 pixels resolution. The phone is powered by the Quad-Core MediaTek processor which is clocked at 1GHz and has 2GB of RAM. The internal storage of the device is 16GB and it can also be expanded using a Micro SD Card. The Moto E3 Power has 8MP rear camera with LED Flash and 5MP front facing camera. The device runs on the Android Marshmallow 6.0 and comes with VOLTE support which means it can work well with JIO Sim. The phone comes with the 3500 mAh battery which is user removable.

By comparing the Moto E3 Power with Xiaomi Redmi 3S and Coolpad Note 3 Lite, the Splash-proof body, solid build, Stock OS and removable battery are its advantages. While the processor and the absence of Fingerprint scanner are its disadvantages.

The Xiaomi Redmi 3s is the one best Smartphone below 7000 Rupees. It sports the same size 5inch HD display with 1280 x 720 pixels resolution. The phone is powered by the 1.4GHz Octa Core Qualcomm Snapdragon 430 Processor and 2GB RAM. The Redmi 3S comes with 13MP rear camera and a 5MP front-facing camera. It has 16GB internal storage with SD Card support and runs on Android M 6.0. The Xiaomi Redmi 3S prime has inbuilt 4100 mAh battery and it is exclusively available via Flipkart.

Comparing the Redmi 3S with Moto E3 Power and Coolpad note 3 Lite, the Processor, Camera and the huge battery are its advantages. While the absence of the Fingerprint scanner is the only disadvantage at its price.

The Coolpad note 3 Lite is the only Smartphone with 3GB RAM below 7000 Rupees. It comes with 5inch HD 720P display and powered by the 1.3 GHz, quad-core MediaTek processor. The internal storage of the device is 16GB and also has the support for the micro SD Card. The Coolpad Note 3 Lite has 13MP rear camera with LED Flash and 5MP front camera. The Note 3 Lite has Fingerprint scanner at the rear side just below the camera. The phone runs on the Android Lollipop and it supports dual SIM. The Phone has 2500 mAh battery which is not user removable.

After the Moto E3 Power Vs Redmi 3S Vs Coolpad Note 3 Lite comparison, we would have got some idea about each device. Now you can choose the device which fits your requirement to the best. To my opinion, I would rate Xiaomi Redmi 3S as the best option among these three Smartphones. If you have any further confusion on choosing the best phone among these then please leave them in the comment section below. For more comparisons posts and tech news, Follow us on  Facebook, Twitter, and Pinterest.

Honor 9i Vs Honor 8 Vs Xiaomi Mi Max 2 comparison

Moto E4 Plus Vs Redmi 4 Vs Redmi Note 4 comparison